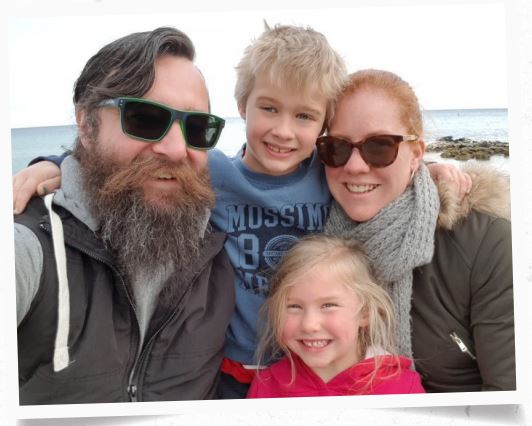 The Hughes Family’s life changed on 6 February 2018. Stu died as a result of a head injury when he fell from a roof he was repairing. Their children Harrison and Sienna were just seven and five at the time.

The family engaged in counselling and play therapy for the kids. During the early days of their grief journey, a friend told them about seeing Feel the Magic on TV.

“I watched countless videos and testimonials about Camp and I remember thinking to myself, if it was half as good as everyone had said, then it would be ok. Harrison and Sienna attended Camp in August 2019. In the lead up to Camp, Harrison was adamant that he wasn’t going. That it was pointless and it wouldn’t fix anything. Sienna was a little more welcoming, but still had reservations. I was determined that they had to go. Call it a mother’s intuition, call it exhaustion, call it stubbornness – they were going! There may have been some bribery thrown in too. It turns out that Camp Magic is one of the greatest gifts you can give to a grieving child.”

“Harrison has made connections and bonds that have changed his outlook and his life. I know that sounds a little dramatic, but honestly it’s true. When Harrison returned home, he was able to see positives and was finally open about sharing them with Sienna and myself. It was such a massive step forward.”

“ When I asked him what was the best thing about Camp? Harrison said: “knowing that other kids have lost their Dad too and we’re not the only ones.”

“Sienna enjoyed her time at camp too, but because of her age when Stu died, she found things a little challenging. She was still engaged and learnt a lot, like breathing techniques that she still uses nearly every day. She also learnt about her “emergency meter” and when to ask for adult support if she can’t regulate her emotions, she learnt about self care and the different “seasons” of grief. She especially loved the memorial bonfire where she was able to write a letter to her Dad and send the message to heaven.”

We thank the Hughes family for their courage to share their personal story of grief and loss.